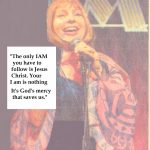 Comedy Cruise Lines judges had eyes on me–

performing with only me.

took photo that was in color, not like the rest.

Interviewed by the Miami Herald that day

Robert Santiago to see what I had to say.

At the Improve Comedy Club in the Seminole Hard Rock Hotel

I got to make the judges laugh and did quite well.

I told Robert, “I live my life on the edge–

I look forward to this” Enough said.

said “You are off the chain–

Thanks Robert, improv is what I do–

my act never the same!