MY AUNT AND UNCLE 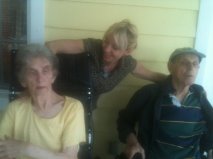 As a child I remember those days
when Aunt Audrey would come from faraway.
Aunt Audrey was tall and wore jewelry like rings
she brought gifts and interesting things.
Aunt Audrey lived in Japan, the far east
she had an interesting life to say the least.
Her daughters Marlena and Renee
had played with us for a couple of days.
Then they would leave on a plane
I would see them again at an older age.
Uncle Norm I also saw when I was young
we traveled to Rhode Island when I was age 1.
Then I would see Aunt Audrey & Norm
in the sunshine state—
they lived in a development with wooden gates.
I celebrate Christmas and the holidays
with them and daughters Marlena and Renee.
They work in the movie business today
They have children and live in L.A.

Written by Suzae Chevalier on April 9,2012