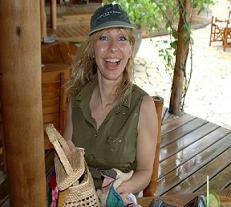 Bora Bora was an island with strong connection

The Air Tahiti Nui logo is a flower that I draw
it is in my children’s book
I never before saw.
I also have a birthday ceremonial chair
they use the same chair in these islands
when people get married-
it has an extra flair.
Now Paul Gauguin was a French painter
who painted a fruit basket with a knife—
I would like to revisit Bora Bora
like Gauguin did who lived there at end of his life.