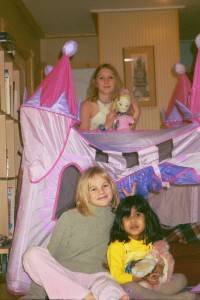 Waiting patiently outside on a rock

Elsie would have toys that she would talk.

I would drive up in my blue caravan–

inside van was toys from Krendoll land.

Playing downstairs with Melodie and Razel

stories we made up with Razel voice nazel.

Madeleine celebrated her birthday with my fantasy land

Yardley a younger sister would play along soon

she loved playing with Razel but Melodie too!

I have photos and videos of “Melodie’s Meltdown”

Madeleine and Elsie would have unfreeze Krendoll town.

Now I will put together a collection of photos to remember

of the three girls before Christmas in December.